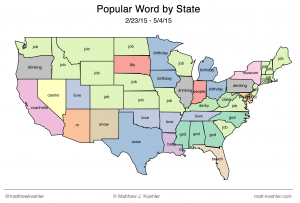 This map shows, for each state, which word was used the most, above and beyond the national average between 2/23/15 and 5/4/15

Certain words were disallowed, because such an analysis naturally produces a result of “Arizona” for the state of Arizona, or “Cubs” for Illinois. So the following types of words were not allowed to be picked:

Because it’s hard to read, I’ll point out that Maryland is interested in the “phone”, and Rhode Island in “school.”