Wow, there sure is a lot of cursing going on twitter! Over 7% of tweets on twitter contain one of 5-swear words tracked in this analysis. 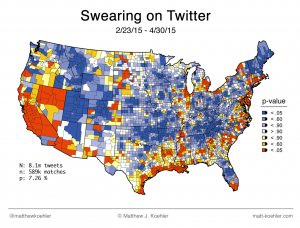 Is cursing regional? On twitter it certainly seems to be. Look at the map on the right … Red indicates regions where the rate of swearing is statistically significantly higher than the overall rate (7.26%), dark blue indicates regions statistically significantly lower than overall rate, with other colors indicating rates in between those two extremes.

Is there something about living near water that makes people swear more? Living near the coasts, the great lakes, or the Mississippi river seems to correlate highly with tweeting a blue streak!

There is corroborating support for this data from two sources. The first comes from a story from the atlantic in 2012, describing how

The map on the right shows the state of swearing at July 14, 13:27. Looks quite similar to the map I presented above. 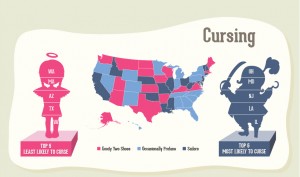 Another study of 600,000 phone calls from though out the country by marchex.com shows you which states curse the most on the phone (dark blue = most, pink = the least). It’s encouraging that there is some similarities to the twitter map presented above (but also some key differences).