Many have seen the decline of “please” and “thank you” in the language as a sign that as a whole, society is becoming increasingly more rude. Although, it “a commonplace remark that older people invariably feel that the younger generation is speeding swiftly on the road to perdition.” 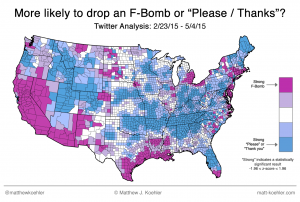 The deep south still keeps its reputation as defender of manners. And, for the most part, the midwest politeness is supported, except for eastern Michigan and northern Ohio.

Let me add a point about methodology here. On this map, I’ve found it useful to do some cleaning and smoothing of the data. Using an algorithm similar to how images are smoothed (de-noised), points on the map are smoothed to help eliminate noise from the map and fill in some of the gaps (when no data is present). 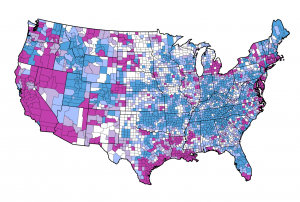 On the right, you see the unsmoothed version of the data. To convert to the smoothed version, for each county on the map, a new value was computed in which the county data was combined with it’s nearest neighbors to form a weighted average (weighted heavily on the current county). Such that counties with no data are filled in with the average of its nearby neighbors. Also, counties that stick out (like stray pixels) as outliers (say one light purple county, surrounded by all dark blue counties), tend to get colored as dark blue. In image processing, this process removes specs of dust, bad pixels in the camera, and can sharpen an image. On these kind of maps, it can help see patterns more easily.

Alternatively, when smoothing is used, you can conceptualize each county as just being a bit bigger than it is depicted on the map. That is, the color of the county represents (in a weighted way) the data for that county and it neighbors.