In this analysis of twitter, I followup on the SwiftKey Emoji Report that analyzed what emojis are most popular (by country) sent from text messages (MSM) using their swiftKey keyboard (on IOS and Android).

One of the most amusing categories in their analysis is countries that are most likely to use “Raunchy” emojis. Surprisingly, Canada leads the way, and the U.S. is pretty active as well. “Raunchy emojis” may need some explaining – some emojis have been “repurposed” to stand for other things less savory. Examples include: 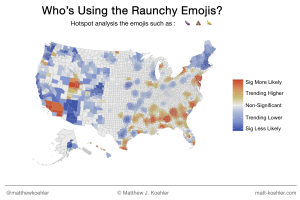 Following up on this report, I wanted to see the geographical distribution of these raunchy emojis on twitter. I followed 9 raunchy emojis which I’m not listing here, because I want to keep this “safe for work.”

Overall, there is usage in .12% of tweets, about 1/2 the rate (.23%) found in the SwiftKey Report. Perhaps people use them less in the “public” space that is twitter, and more in the “private” space that is text-messaging.

There is, however, regional variation in this rate of .12% The map shows you where these emojis are more likely to be used (orange/red areas), and less likely (blue areas). There is a clear band in the south more likely to use these raunchy emojis, and the upper northeast is far less likely to do so. Also, UTAH, what’s up? Didn’t expect to see you light up like that!

Why do these difference exist? I do not know. There is probably some innocent usage here, perhaps the people Utah really love eggplant. Beyond that, your guess is as good as mine.

If you have any ideas, let me know in the comments!